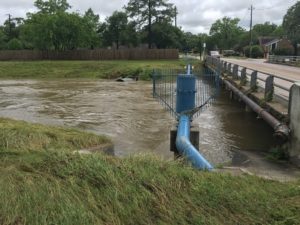 Due to a number of factors, including soil subsidence and development in areas upstream of Jersey Village, our city will always be at risk of flooding under the right conditions.  We witnessed the destructive power that flooding can have in our community during the Tax Day floods of April 2016.  We also realized the benefits of existing flood mitigation infrastructure when waters stayed within the bayou banks during Hurricane Harvey in August 2017.

City government’s most critical responsibility is to protect the lives and property of its citizens. This includes not just police and fire response, but also protection against natural disasters. The City of Jersey Village can and must do more to investigate and implement measures to mitigate the impact of flooding in our community.

I support moving forward with each of these projects on a time frame that balances the need to protect from flood damage while also ensuring these projects obtain the best value possible using the taxpayer dollars with which we have been entrusted.

In late 2016, the Jersey Village City Council entered into a contract with Dannenbaum Engineering Corporation to conduct a study to identify potential solutions to mitigate flooding within Jersey Village. The Jersey Village Long-term Flood Recovery Plan was completed and presented to city council in August 2017. A copy of the plan, including the data utilized and the recommendations made, can be found at jvfloodrecovery.com.

This plan has become essential to the city’s recent success with grant applications. Without the data and analysis contained within the flood recovery plan, we would not be in the position to apply for grants for the projects listed below.

I support several projects contained in the 2018-2019 City of Jersey Village budget. The first project is the building of earthen berms along sections of the Jersey Meadow Golf Course, as illustrated below. 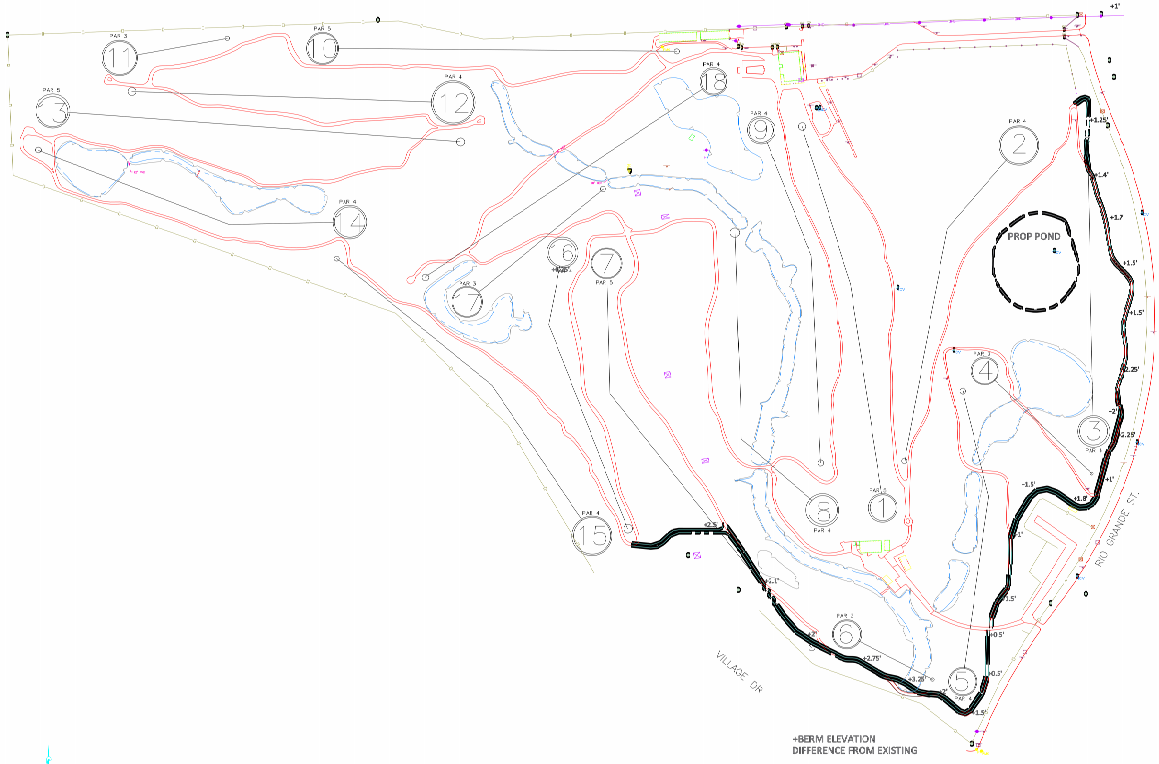 The goal of this design is to keep rain that has fallen onto the course from moving onto surrounding residential streets and to reduce the flow of water from the course into the bayou system.  This will reduce the street flooding that has occurred on Wall Street and will open up additional capacity in the bayou for other storm drainage.

This proposed project was estimated in the flood study to cost approximately $750,000, but the initial proposals from Dannenbaum Engineering came in much higher than this estimate. Unfortunately, because the city is prohibited by state law from contracting for engineering services by competitive bid, we had to formally end negotiations with Dannenbaum Engineering and start the negotiation process over with a new firm. This caused a substantial delay in moving forward with the project.

In the first half of 2018, the city completed a full survey of the golf course in order to proceed to the engineering of the berm. It was determined based on the survey that the berm could achieve the results required while building it to only 107 feet in elevation, which will save the city money in the construction of the berm. We entered into a contract with the city’s engineering firm, Brooks and Sparks, to complete engineering of the berm, with construction slated to begin in the fall. The design you see above was approved by the Jersey Village City Council in July 2018.

The City of Jersey Village will use this design, as well as the design of the street drainage improvements below, to apply for FEMA funding. As of early 2020, FEMA is reviewing the environmental study conducted for the project and we anticipate approval and funding of the project sometime in the middle of this year.

The next project is to improve the streets and drainage on Wall, Carlsbad, Crawford, Capri, and Tahoe.

The flood study found that drainage in these areas was insufficient and would require building additional storm drainage inlets and larger capacity storm sewer pipes.

In September 2018, the city was informed that its application for grant funding for the planning and engineering for the project was approved, saving taxpayers over $523,000.

In the meantime, the city will also apply for FEMA grant money to help pay for the cost of construction for the project. We’re still in a great position to pay cash for the project if necessary, but grants would allow us to focus resources on other flood projects, such as the local share portion of home elevation projects.

As of early 2020, FEMA is reviewing the environmental study conducted for the project and we anticipate approval and funding of the project sometime in the middle of this year. 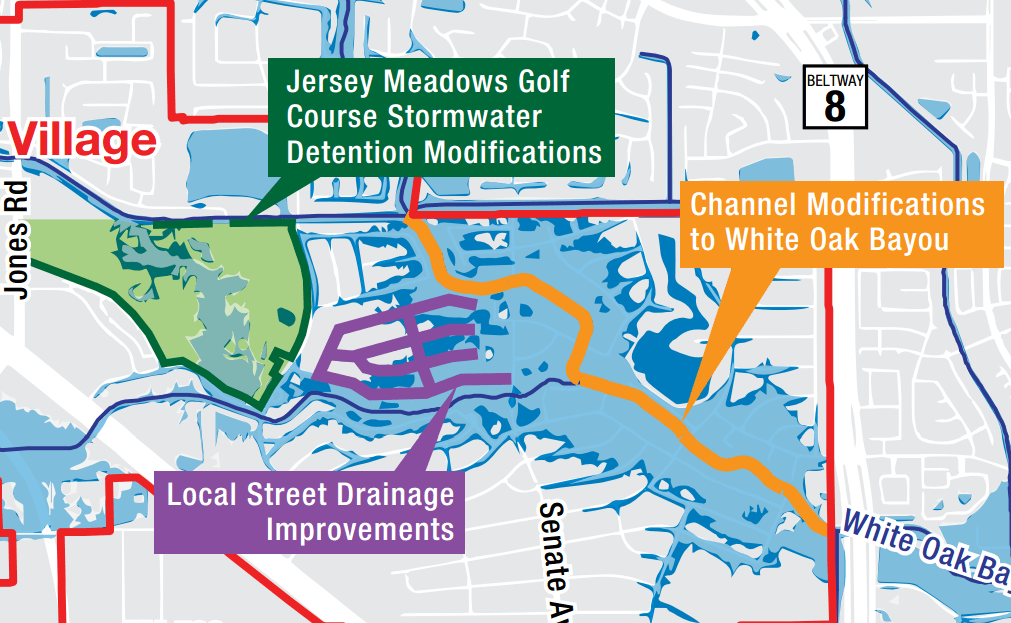 The study determined that the channel that runs south of Wall Street could not reasonably be modified in a way that would produce significant flood mitigation benefits.  Instead, the north fork, as illustrated above in yellow, could be modified as illustrated below:

This improvement would not require the acquisition of any additional land around the banks of the bayou, but would substantially increase the capacity of the channel.

The approximate cost of this project would be $4,600,000.  I discussed this project in person with Congressman John Culberson in October 2017 and he advised me at that time that he was working on drafting legislation to provide significant funding for flood mitigation projects throughout the Greater Houston area. 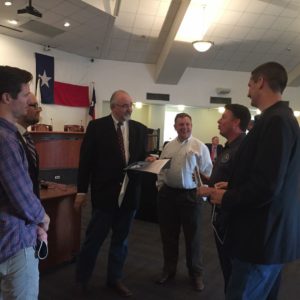 In early 2018, the U.S. federal government adopted a new budget in which $17.39 billion was allocated to the U.S. Army Corps of Engineers for flood mitigation projects in areas recently affected by flooding, including Harris County. Congressman John Culberson’s office at that time stated that this amount will be sufficient to fund all currently federally approved projects in Harris County that were merely awaiting funding. In July 2018, the U.S. Army Corps of Engineers announced that this funding would be applied to continued improvements on the White Oak Bayou channel from West Tidwell to FM 1960, which includes the segment which moves through Jersey Village.

Harris County also overwhelmingly approved flood mitigation bonds of up to $2.5 billion in value to accelerate many of the needed projects in our county. Our city staff and city council have remained in close contact with Harris County Judge Ed Emmett and Harris County Precinct 4 Commissioner Jack Cagle regarding projects that could benefit Jersey Village.

As of January 2020, Harris County has not provided an update on the progress of the design work, but we’re continuing to reach out to obtain more information on the timing of this project. In mid-2018, we were advised that the target completion date for the portion of work done in Jersey Village was mid-2020. While it is likely that construction will take longer than originally projected, we will continue to work with Harris County to ensure this project is completed as soon as possible.

All of the above described projects are termed “structural changes”, meaning that they deal with modifications to infrastructure in the city, rather than to individual homes.  The study determined that if all of the above projects are implemented, all homes would be saved from flooding in the event of a 25 year storm, 85% of structures previously at risk of flooding in a 50-year storm would be saved, and 38% of homes at risk in a 100-year storm event would be saved from flooding.

For the remaining homes, 60 were identified as being candidates for either buyouts or elevation to raise the home out of the flood plain. The cost, depending on participation in these improvements by homeowners and the solutions chosen for each property could run as high as $11,500,000.

Surveys went out to homeowners in August 2017 and shortly thereafter the City of Jersey Village submitted its application for FEMA grants for these elevations and buyouts.

In March 2018, the City of Jersey Village was informed that its application was “identified for further review”. After verification of the data provided in our application, FEMA approved our application in mid-2019. Our city staff has already submitted a new application for FEMA grants for a new group of homes.

In December 2019, work began on the first group of homes to be elevated, and our city will continue to submit additional grant applications until all qualifying homes are elevated through federally funded programs.

We Must Continue to Work With Regional Partners 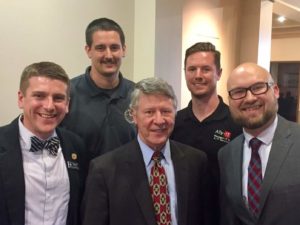 We must also continue to work together as citizens of Jersey Village to press our county, state and federal elected officials to accelerate funding for regional projects from the Harris County Flood Control District designed to alleviate flooding in our area.

With the assistance of regional, state and federal officials, we can continue to secure funding for flood mitigation projects and ensure the timely completion of those projects in the White Oak Bayou watershed. But we cannot do it alone. We will need your help to ensure our elected officials understand that flood mitigation in Jersey Village is a priority for us.

When we work together as a community, I am confident we can find a way to combat the persistent threat of flooding in Jersey Village.