Last week, Harris County Precinct 4 Commissioner Jack Cagle reached out to various stakeholders in his precinct to alert us to the fact that Harris County Judge Lina Hidalgo intended on continuing her persuit of introducing “equitable principles” to the schedule of projects to be funded through the 2018 flood bond program.

On Friday, the Harris County Commissioners Court released the agenda for its Tuesday, August 27, 2019 meeting, which include the following items:

If you don’t take the time to look at the documentation, the two items above seem both unrelated and innocuous. I pulled the documents related to each item (click on the links to open each document):

A proposed resolution from Judge Hidalgo instructing the Harris County Flood Control District to “adopt a framework that ensures a process for the equitable expenditure of Bond Program funds (‘Equitable Prioritization Framework’).”

Most of the proposed framework seems reasonable, but one element in particular stood out: 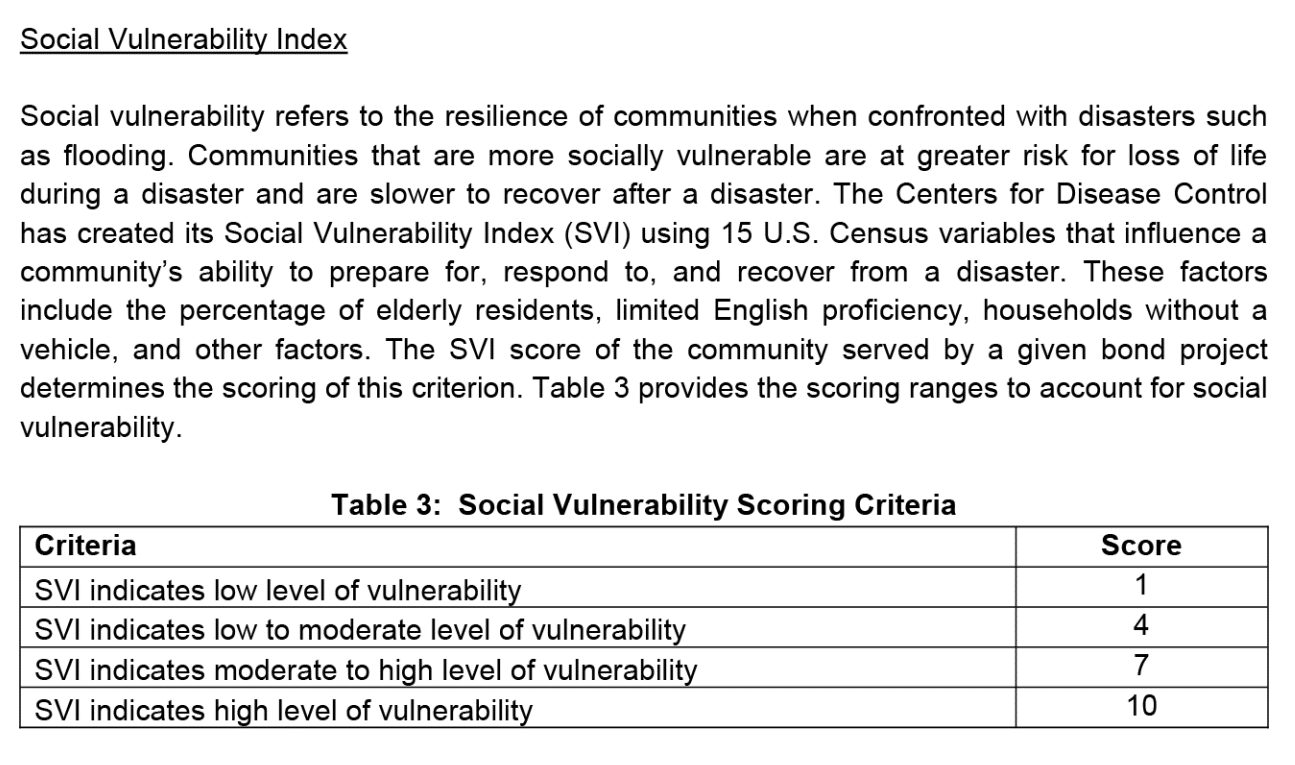 What is Social Vulnerability Index (SVI)?

According to the Centers for Disease Control (CDC), the Social Vulnerability Index (SVI) “uses 15 U.S. census variables at tract level to help local officials identify communities that may need support in preparing for hazards; or recovering from disaster.”

So what are those variables? They include:

How does this SVI factor into whether a flood project is a higher or lower priority? The prioritization framework linked above provides the following weighting system: 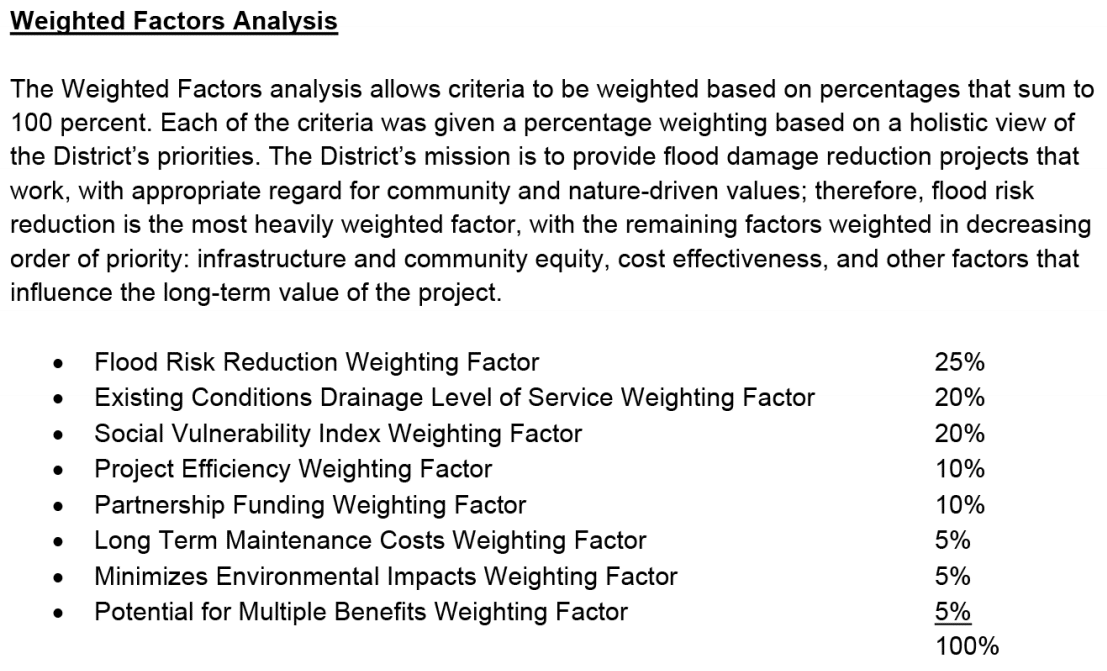 As you can see, SVI plays a significant role in how flood bond projects are prioritized.

What Is Wrong With Trying to Protect the Vulnerable in Our County?

There’s nothing wrong with making an effort to focus on the needs of those who are more vulnerable to flooding due to societal factors such as income, disability or lack of transportation.

There are, however, ways to address these issues without routing bond money from projects which would protect against greater property damage. Harris County should improve its flood warning systems and plans to reach out to people known to be most vulnerable and provide the help they need to evacuate and recover quickly.

If, however, we proceed with this plan, we’re likely to lose out on significant federal grants which, unlike the proposed county plan, focuses primarily on projects which provide the greatest property damage reduction compared to the cost of the project. This analysis is called “Benefit Cost Analysis” and is the means by which projects competing for limited federal dollars are ranked and awarded (or not awarded) those funds.

How Will This Proposed Framework Affect Jersey Village?

Luckily, only one project located in Jersey Village is affected by this framework: the E127 tributary improvement project. This is the tributary that runs south of Wall Street and provides drainage conveyance for a wide area west of Senate Ave. 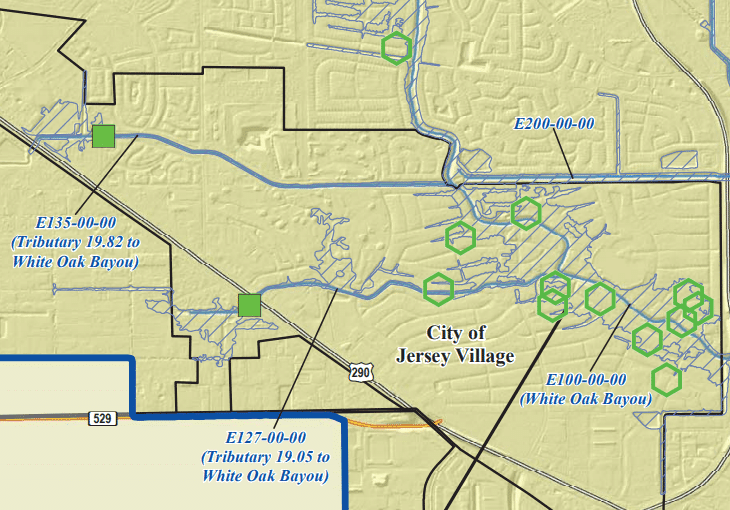 Under the proposed framework, design of this project wouldn’t begin until Q1 2021. Construction would be slated to begin in Q1 2022 with project completion slated for Q4 2022. Unfortunately, while the score and ranking of the project is available in the framework document, there is no information about the breakdown on that score. What we do know, however, is that Jersey Village’s low SVI would have negatively impacted the score compared to a system that did not use SVI.

The golf course berm, Wall Street area drainage improvements and our home elevation programs are all exclusively local/federal projects and therefore not funded at all by the county’s flood bond program. They are, therefore, not listed in this framework.

The White Oak Bayou channel improvement project is not affected by this framework at all. On May 14, 2019, the Harris County Commissioners Court approved a $463,180 agreement with an engineering firm for engineering services in support of a project to construct channel conveyance improvements on White Oak Bayou from West Tidwell Road to FM 1960. The part of the project for improvements within Jersey Village (Project ID E100-00-00-E005) is currently in the design stage.

Why Should We Be Concerned?

Although this plan currently has a relatively low impact on our city’s overall current plans, this could set a precedent for prioritization of county projects of all kinds in the near future.

Also, not all projects have been identified for the bond program. It’s possible that new projects which could benefit Jersey Village may be identified and placed into this framework. It is important that we fight to maintain a fair system to prioritize projects which would provide the greatest property damage reduction.

What Can We Do?

Judge Hidalgo will be on the ballot here in Jersey Village in 2022. Commissioner Cagle, who also represents Jersey Village as part of Precinct 4, has been steadfast in his opposition of the equity proposal. We don’t vote for any of the other commissioners, so our voices are not nearly as loud for them as it will be for those occupying offices on our ballot. The greatest chance we have of influencing the final outcome, therefore, rests with Judge Hidalgo, who arguably cannot afford to alienate affluent suburban areas who stand to lose out under this proposal.

Contact Judge Hidalgo to let her know that flood mitigation funding should be allocated to those communities taking the greatest damage from flooding and where these projects can achieve the greatest reduction in damage to homes. To do otherwise jeopardizes opportunities for federal funding and reduces the effectiveness of tax dollars spent.

Or, if you are able, sign up to speak at the Commissioner’s Court meeting on August 27 at 10:00am. You must sign up ahead of time by using this link: https://appearancerequest.harriscountytx.gov/ Be forewarned: the public appearance portion of the meeting is at the very end of the agenda and meetings during Judge Hidalgo’s administration have run extraordinarily long (between 5-7 hours the last several months).

And, above all, share this information with all of your neighbors and encourage them to contact Judge Hidalgo!